skip to main | skip to sidebar

Our Boy Loves to Laugh

Have Yourself a Merry Little Christmas! 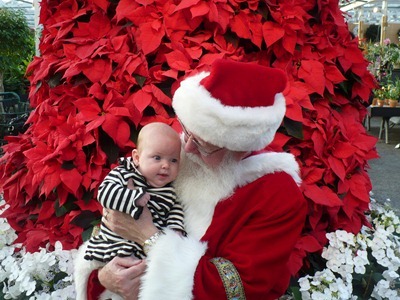 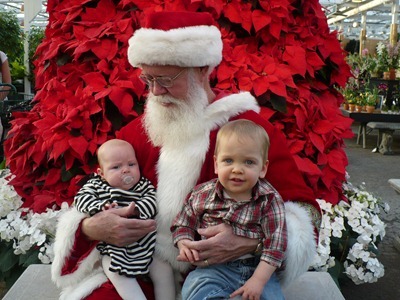 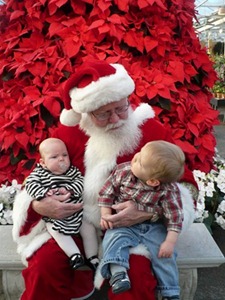 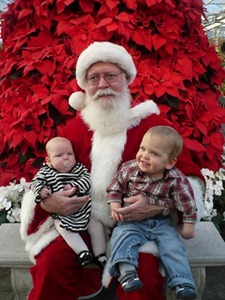 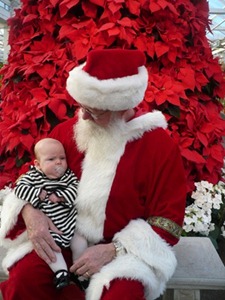 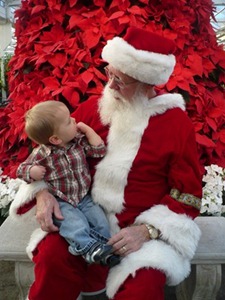 Sorry no posts lately.  There are things to blog about but no pictures, which makes the post.

Devin’s computer battery pack died and all the pictures are  on his computer.

Last week with all the rain we were flooded in.  The bottom of our hill had probably 1-1.5 feet of water.  The neighbor drove their minivan through and water was coming in the doors.  That’s a lot of water!  Ironically my sister in Minneapolis was snowed in with blizzard like conditions.

Also, Devin and I continued our annual tradition of making a blown glass ornament at Art By Fire.  We had a nice evening with each other as my mom babysat our little ones. 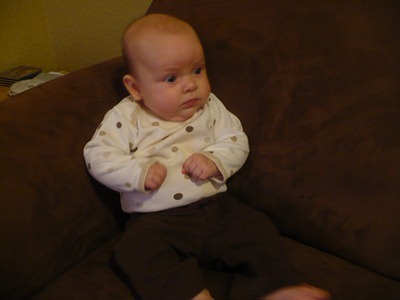 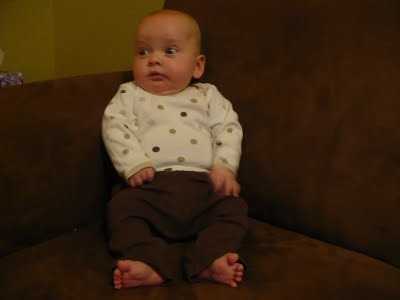 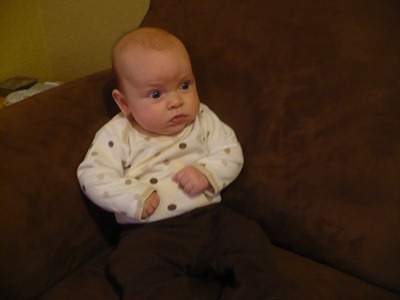 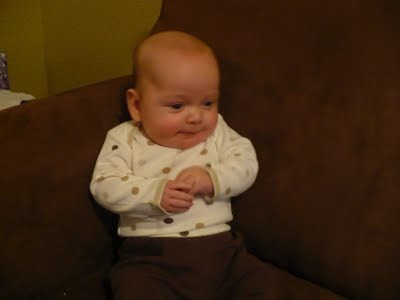 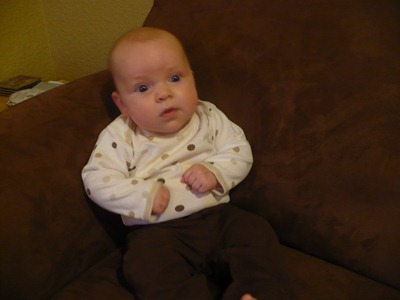 Today is Evie’s 3 month birthday.  Where did the time go?  I can’t believe it has been 3 months already.  Seriously, my baby is growing up too fast!

A little bit about our little girl:

She is probably around 12 pounds (haven’t weighed).

She is wearing size 1 diapers (and cloth)

She is wearing 3month clothes and starting to fit into some 3-6month.

She sleeps great during the day, but only if she is swaddled.

She is nursing usually 6 times/day.

She is spitting up a lot.

She has lost all the hair on the top of her head and has a bald spot in the back.  The first of the awkward hair phases.

Even if Jacob and I are in PJ’s all day, Evie is dressed in one of her many cute outfits.

She is smiling and “talking” a lot.

She loves watching Jacob and always smiles at him. 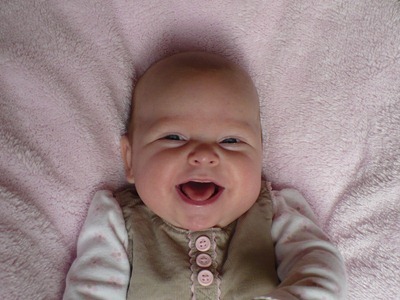 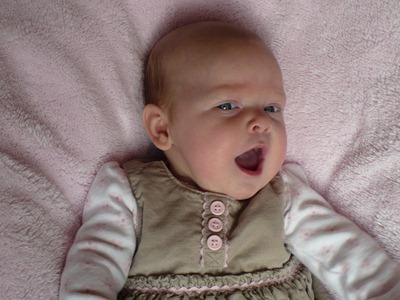 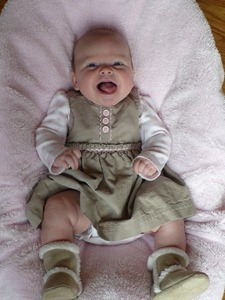 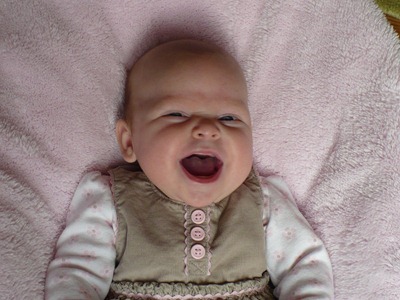 Posted by Callie at 9:48 PM No comments: 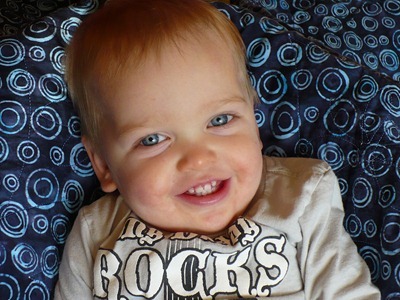 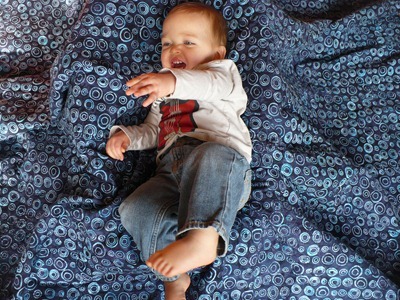 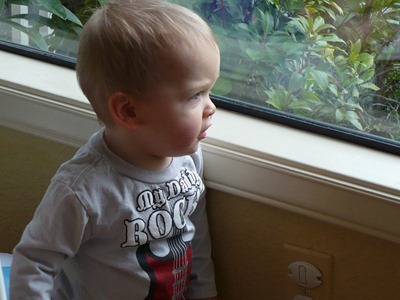 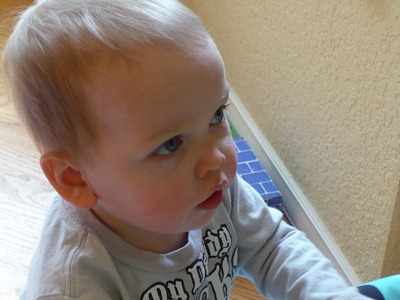 Posted by Callie at 8:24 PM No comments:

Actually he was 15 months last week, but we had just gotten back from Minneapolis, it snowed and it was Thanksgiving, so I’m a little late.  Jacob had his doctors appointment yesterday so we got his stats.  He weighs 20lbs 12oz and is 31 inches tall.  His weight is still in the 5-10th %tile but his length moved from the 25th %tile to the 50th %tile.  Finally getting a little taller.  Jacob also just happen to have a fever that day so he avoided 3 vaccinations.  And when we got home he vomited 3 times.  Oh the joys of motherhood!  He is feeling much better today, but I have to admit I loved to snuggles yesterday, well until I got puked on that is.  Despite the fever and a little congestion Jacob checked out great.

He is a little bit behind (though within normal) verbally.  He still doesn’t really say anything.  He does have some words but doesn’t say them on his own, only repeating after us.  And he still doesn’t say “mama”, I am trying not to take it personally!  He says dada, cracker, teddy, up, down, cup, car, banana.  He does sign more, eat and please.  He also doesn’t point yet.  So to let us know he wants something, he whines.

He is on the go all day long.  Running around the house, climbing on anything he can.  He climbs up and sits on the table top toys.  he can climb up on a chair if there is a toy in front of it to boost him up.  This morning he was sitting on the suitcase playing with a toy.

He is still napping 2x a day and lately his naps have been about 2hr each (maybe because he hasn’t been feeling well).  He is sleeping great at night.  His bed time is about 7:30-8:00pm and he wakes on average 7:30am.

His favorite foods are bananas, yogurt, grapes, cereal bars, cereal bars, meatballs.  He does not like cheese or meat (other than meatballs, though he might take a few bits of ground beef) or vegetables except brown sugar glazed carrots.  He eats with his fingers or being fed by a spoon.  I am just starting to try a fork with him.

His favorite toys are my old cell phone, well any cell phone or cell phone toy, remote controls, balls, empty laundry baskets, anything he can climb on, containers to put things in and take out, music toys, and Bible Action Songs DVD, well TV in general.

He is quite the character and has quite the personality.  He loves to laugh.  He is easy going most of the time.  He loves to test our limits and will throw a small tantrum when he doesn’t get what he wants.  He really is such a good little boy.  We love him to pieces and wouldn’t trade him for the world!